Infected, partially devoured, survive. Prevent the parasite from going deeper into your body, as you escape the depths of your lab.

made for Ludum Dare 48

creative mechanics, i love it

awesome stuff, bit of a difficulty spike for the hallway area but it made for a tense finale. You nailed the feeling of panic with the mechanics too.

you are right it doesn't even turn on for me

is it just me or my heart is beating fast :D pls help me :D *cough*

youre going to di

If there's three things I love about this game, it's that the sound effects and graphics are beautifully unsettling, the movement system is hard to master, but not so hard that it's frustratingly punishing, and the mechanics work together to make really tense moments. When I first booted up the game, I had troubles with how my mouse was interacting with it, since I have two monitors and my cursor was stuck on one of them, but while I was trying to fix it, I legitimately felt anxious just listening to the man cough vigorously, and watching the pool of blood under him grow larger as the parasite borrowed towards his brain. When I finally got everything working, I wasn't the best at running from the monsters and quickly managing my syringes and bullets, so I had to retry some of the levels a few times. But even though I knew what was coming, my heart never stopped racing whenever I had to run away or frantically load my gun while monsters were tailing me. Overall, this is an amazing game jam game, and a perfect example of how to do survival horror right.

my computer is garbage i cant play it in browser cause its too laggy and when i download it half of the screen is black so i cant use the syringes :(

ok this need to be made into a full game where he mannage to live somewhat a healthy life outside this new hell and show up people with all there limbs that he kicked more ass then them.

That last level was intense. Luckily I'm speed when it comes to point n click so I was able to reload fast, but damn did that make my heart race

If you go fast enough, and save the syringes for when the parisite is close to killing you, because the syringe resets where the parasite is to the bottom, you can get through 3 levels, then on 4, you can use a syringe.

Whew that last level. He was a cowboy in his past life.

Really nice concept. By the last level I was feeling some of that survival horror anxiety. One thing that screws the game up a bit is how you can just drag faster and more rapidly to move at mach speed - it gets rid of the tension in most of the levels.

is the screen supposed to be white when im playing the game on browser with my mac?

if not (e. you cannot see anything) then no

solution to the last level:

bro my hand was the fastest i've ever seen it, i feel like it was going at mach speed

got the last level is hard.

and there goes a full quarter of my clicks left on my mouse before it breaks, this game was a factor to it.

Pretty cool game in some way. Just wanna say something about obvious problems I found. I don't want to offend the author of the game (His youtube channel is pretty nice. I like it for videos about making 3D models in PS1 and N64 style). I hope that my critique will be helpful for the creator and everyone who reading this.

1.1. Game has a small contradiction in some mechanics. It's not scary for the game but strange in some way. Haven't you noticed that? Try to guess by reading following facts:

a) The player's health decreases over time;

b) When the player completes the level all his characteristics stays at the same state;

c) When the player dies he starts the level again with the same state of all characteristics which he had at the start of that level.

Got it? If you complete current level with enough small health you won't be able to complete next level because you won't have much time to cure yourself. After your death you will be in the same situation because your health will be restored to the same state as it was in the beginning of that level. Over and over. It's like some of those situations where you save your game right before the player dies.

It's not scary because the game is small and easy to complete. If the game was big and difficult then players would have to restart the whole game in such situations, as I did when trying to reproduce given problem.

It can be fixed by restoring the health at the beginning of the level a little bit if its value is enough small. This isn't the best solution but it can solve the problem in some situations (Not all situations! Try to guess what will happen if player doesn't have something to cure himself from the last level).

1.2. Not good that player can complete most of the levels without using methods which were given by developer. You don't need to use gun. You can just run through the level maneuvering between the monsters.

Maybe it's not true but I think that developer thought the same and decided to add "hard" level at the end with 5 monsters in tight corridor with a lot of bullets for gun in it.

2.1. In my point of view background needs some interesting details. Simple rectangular walls and white floor contrast with the visual of main game objects and inventory.

3.1. Pretty good sound design but for having some atmosphere in the game it needs to have more "deep" (?) and "living" (???) sounds in it. Maybe some music. I mean that youtube video of making that game has such music that can build horror atmosphere in some way.

4.1. The same as visual design. One level has one little joke in it (the end of the level is near to the start and you can't go there due to the wall in front of you). I don't mean that level design must have more jokes but it has to contain more intersting details, as I said for the visual design. Of course if the game was supposed to be detailed in such way by the author.

Game is pretty cool but it has some flaws that can be forgiven due to the fact that it was made for Ludum Dare in 2 days. Why did I write this review? Because I love doing such things. And mostly important because that critique of small games can be helpful for making big games, in my opinion.

The game is fresh and interesting... The last level is not fair though...

Yeah, especially if you start with wasted bullets, I struggled with it constantly though until I figured you didnt need to load the entire cartridge, just do the first four and you're fine.

you just need to speed load and have faith

Great game, love the inventory and reloading mechanics! It's just challenging enough to make it fun!

It's a nice game, the last level was so unfair though...my arms now hurt so much

Love the manual reload. But I find hard closing the inventory :D for some reason I always used mouse wheel.

would have to say, this would make a very excellent mobile game

oh my arm is exhausted from that last level

I keep restarting the game to check for extra syringes and other (maybe) things, also, in the third level, I went so fast for that syringe that was in the bottom right corner that the test subject lit turned a full 180 then when I got out of that room another full 180.

The game has a lot of potential! The arm dragging mechanic is annoying, yes, but it fits with the theme of being a 1 arm-no legs guy crawling in a lab. The manual reload is soo good!

this game has controls that are too clunky, pair that up with a game that is incredibly difficult and you got grounds for a very unenjoyable game session

Doesn't quite teach the player to be ready for the final level in time, didn't really make me that anxious during play, but had a cool concept and employed features that supported that core idea well.

The atmosphere is just so eerie and the fact that you have to manually remove used bullets and put new ones in really makes the game stressful.

1:how does this man have so much upper body strength?

2:how has he not bled out yet?

3:what magic parasite removing treatment is outside of his lab?

Answer to the first two: Its a game

a game with a STORY!

Amazing game, you really are one of the best developers out there I love your devlogs, btw as feedback i feel like closing the inventory should be mouse scroll down

Was really fun, however I didn't pick up the gun in the one level and now I am softlocked in the hallway level. :_(

When I play games, it's to relax and have fun

Absolutely amazing game, the final level was a perfect mix of a mad dash and then lining up good shots

seriously so much fun, everything about it is so unique. I would love to see this game get some more love and polish. The learning curve was a little rough , it helps that all the controls are on the mouse in one place. keep up the great work

This is incredible! You are a master. 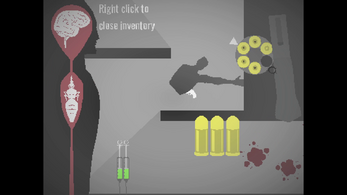